It’s my Principia Rex, the bike I’m riding at the Hull Triathlon in 2015, which forms the banner for my blog. I bought the frame back in 2000 when I was working in a specialist triathlon shop near the south coast, long since closed. They were the UK distributor for Principias, and as I was staff I was allowed a good discount. I built the bike myself with 9 speed dura-ace groupset and a pair of Mavic Ksyrium wheels. The bike handles like a dream, although it is very responsive with a short wheel base, and very stiff. Every watt of power is transferred to the back wheel. 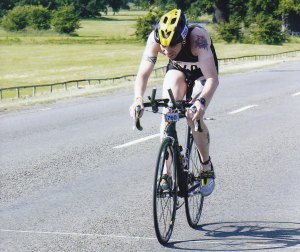 I rode a couple of cycling races in 2000, realsing that I wasn’t a cyclist, so switched back to triathlons. The above photo is from the Windsor Tri in 2003. I competed in the World Triathlon Championships for my age group later that year, in New Zealand.

You very rarely see Principias now-a-days, but back in the late 90’s and early 00’s they were at every triathlon. They were also ridden by the short lived Linda Mcartney cycling team, and it was rumored that Sean Kelly was riding one painted to look like a Vitus.

When I moved to Lancaster, the Principia came with me, where I finished a few more triathlons, duathlons and sportives. Due to the out of date groupset on the bike, which could only be replaced via ebay, the bike only gets used when the weather is nice, but it has done approximately 17,000 miles. Over the winter I decided to get the frame resprayed, to make it stand out a bit more.

Pink, my bike is now bright pink, with pink bar tape and pink bottle cages, along with some distinctive decals.

Combine the bike with pink Sarko7 socks and a black top which shows off my beard, I do not go unnoticed.