Towards the end of 2012 a planning application was made for 50 residential units. The new access road would be built directly off the A6 in Galgate, south of the crossroads and north of the railway bridge. The image below once again shows the location of the Air Quality Management Area (AQMA) in Galgate. 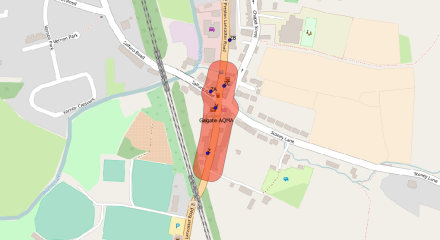 Every trip generated by this development would have to pass through the AQMA, so an air quality assessment was required. It was prepared by Gem Air Quality Consultants Ltd and I’ve had a good look through it. Documents related to a planning application are all available on the Lancaster Council website, although they can take a bit of hunting. The report is concise and well written, although guidance has changed in the last couple of years. The air quality modelling was done using the proprietary software ADMS, rather than the free DMRB, which was what I used in Part I.

An air quality assessment will model the air quality for the last full year before the application, so in this case, the report was written in 2012, with the data used in the modelling from 2011. An assessment will then use the verification results to model a future year scenario, generally five years later, in this instance 2017. The future year will model the air quality both with and without the development, so that the impacts of the development on its own can be shown.

Gem have used the same diffusion tube locations that I did, as can be seen on the image above, but they have also modelled them for the opening year scenario. I have got hold of diffusion tube results from 2015 so we can compare the actual results with the modelled results for 2017. I know there is a couple of years difference, but the results should be similar.

The results from the diffusion tubes at locations V, Z and ZC in 2011 were, 43, 41 and 37 micrograms per cubic meter. In 2015 the concentrations at all three sites had increased, so the air quality has got worse. The results from the air quality assessment for 2017, modelled the concentration at the diffusion tube locations as 31, 30 and 27. This is a very big improvement in air quality, which has not materialised. This is important, as planning decisions can hinge on things like this, so why the big difference.

The first thing to note is that this isn’t an issue with the air quality assessment, this was done using the most up to date guidance at the time. The problem is primarily with the emission factors toolkit. This is a spreadsheet that calculates the emissions from vehicles on the road in the UK, and as older cars are scrapped and replaced with more efficient newer cars, the volume of polluting emissions decreases. Unfortunately, real world emissions have not been decreasing as quickly as expected for various reasons, for example, the Volkswagon diesel scandal.

Many local authorities realised that air quality assessments did not resemble real world scenarios, so now most assessments will include future scenarios modelled with emission factors from the present day. This will give a ‘worst case’ scenario, although as I have demonstrated here, ‘worst case’ is probably what is happening in Galgate.

Finally, is there anything that I would add to the assessment that was done for this development. Guidance has moved on, so you would have to include something about the railway line passing so close to the new houses. I would also liked to have seen something about designated habitats, for example Sites of Special Scientific Interest, of Local Nature Reserve. Close to the proposed development there are two ancient woodlands, Cockshades Wood and Little Cockshades Wood, as can be seen in the image below.

From the guidance, neither of these woods are close enough to the development to be effected by it, but it’s always nice to know that a consultant has looked at these things, because the next assessment might be sharing a border with a conservation area.