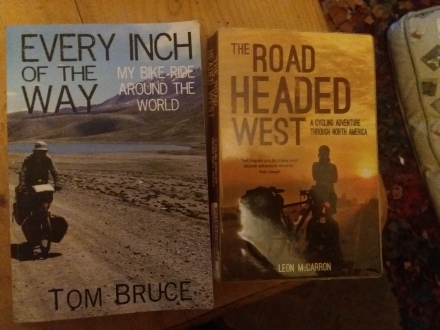 I must have read half a dozen round the world cycling books in the last few years, and this one by Tom Bruce is one of the best. I prefer the adventures that are not a race, although I thoroughly enjoyed both books by Mark Beaumont* and Sean Conway. I like it when the author takes their time, with rest days and unexpected detours, which can be far more interesting. Tom is obviously nervous for the first few weeks of his adventure which comes across in the style of the writing. Give it a few chapters and he soon gets into his rhythm, hooking me in. What I also like about round the world cycling books is the different routes each cyclist takes, and then being able to follow the route on the world map that we have in our bedroom.

Not another round the world book, as this one is ‘only’ across America. Leon McCarron’s trip is a fair old adventure, made harder by going the ‘wrong way’, east to west with headwinds all the way. Every adventure is unique and one thing I loved about this book is how clueless Leon is at the start, and the enormous amount of luggage he decides to take with him. Four full panniers and a trailer. Early on he meets up with Susie, a fellow long distance cyclist, and I got the feeling Leon gained a great deal of confidence from riding with her for a few weeks, and that without her he might have given up. Later on he meets up with three other travellers and they seem to gain confidence riding with Leon. The book also contains a few scary moments, but on the whole nearly all of his encounters are full of the kindness of strangers. The end of the book also has some great advice for would be adventurers. My favourite is what to do if you have a mechanical. Either you’ll fix it or someone else will, simple as that.

Leon has managed to turn his adventures into a living, and I’m hoping to pick up his other books, especially the one about Mongolia, which is somewhere that my beautiful wife is keen to cycle through.

*Today Mark Beaumont announced that he is going to attempt to cycle around the world in 80 days, 240 miles a day, fully supported. He’s off on a warm up training ride of 3,500 miles around the coast of the UK. I’m hoping to ride with him for a few miles through Lancaster.

You can read my previous book reviews from 2017 here and here.