The 30 minute train journey twice a day means that I’m reading far more than I have in the last few years, and also writing about the books. Two more cycling books to review here, the first is Cycling home from Siberia by Rob Lilwall and the second is Cycling to the Ashes by Oli Broom. 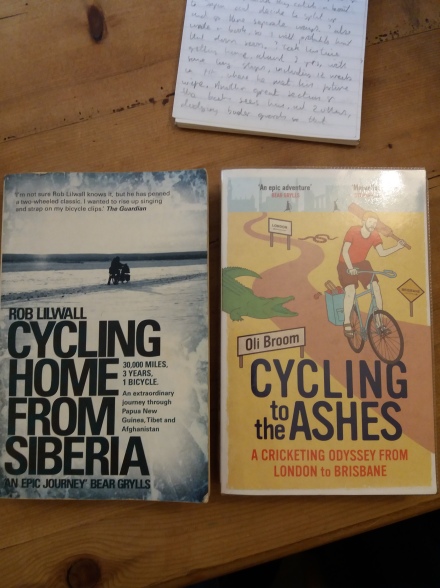 Cycling from Magaden on the far east coast of Russia, through Siberia does appeal to me, but not in winter like Rob did with his friend Al. This section of the book was by far the best until they catch a boat to Japan and decide to go their separate ways. Al also wrote a book which I will probably hunt down soon. Rob took his time getting home, taking almost three years, with some long stops along the way, including 12 weeks in Hong Kong, where he met his future fiancee.

Another good section of the book sees him and two others dodging border guards so that they can cross Tibet. Overall the book was an interesting read, although there was a little too much God for my liking.

Another form of religion dominates the second book; Cycling to the Ashes. Obviously the religion this time is cricket, as Oli spent 15 months cycling to Australia to watch the Ashes. As with all big cycling adventure books, it’s full of ups and downs, mental and physical ones, psychological and geographical ones. Much like the first book, Oli decides to cross most of Europe in winter, wild camping most of the time. I have woken up once with a frozen water bottle when camping, and it’s not something that I would want day after day. He also managed to cross the whole of Europe without getting a single puncture. I want to know what tires he was riding.

This book, as the name suggests is full of cricket as well as cycling, so if you’re not a fan of cricket you might want to give it a miss. I did enjoy it even though I’m not a huge cricket fan.

“I think it’s pathetic he isn’t cycling home again,” said Ian Botham, which was written on the back cover. Made me laugh out loud.

My four other book reviews so far this year can be found here, here, here and here or alternatively find the Book Review category on the right hand side of my blog. Part VI will be coming soon.