What’s the Hurly Burly, I hear you cry? It was a 10k open water swim in North Wales organised by The Outdoor Swimming Society, who also put on the more famous River Dart 10k.

I’ve been swimming more this year than ever before, but I was still nervous as we headed towards the event, especially after Isoman (read about it here). The swim at Isoman was supposed to be 7 miles, but it based on other peoples Garmins, it was most likely about 12k. It was the hardest swim that I’d ever done, the longest swim I’d ever done and by far the longest non-wetsuit swim I’d ever done. I will stick to wearing wetsuits from now on (read about it here).

The Hurly Burly is set in the village of Barmouth, and goes up the estuary with the tide, advertised as maybe the fastest 10k swim you’ll ever do. I was hoping that it was as I didn’t fancy 3 or more hours in cold water.

Me and my beautiful wife decided to make a weekend of it, staying in a pod at the excellent Hendre Mynach campsite less than a mile north of Barmouth. After the Satnav had a moment of madness we made it in plenty of time. We walked along the beach with our unruly pointer, Nelly, into Barmouth so that I could register. Nelly loved the beach. 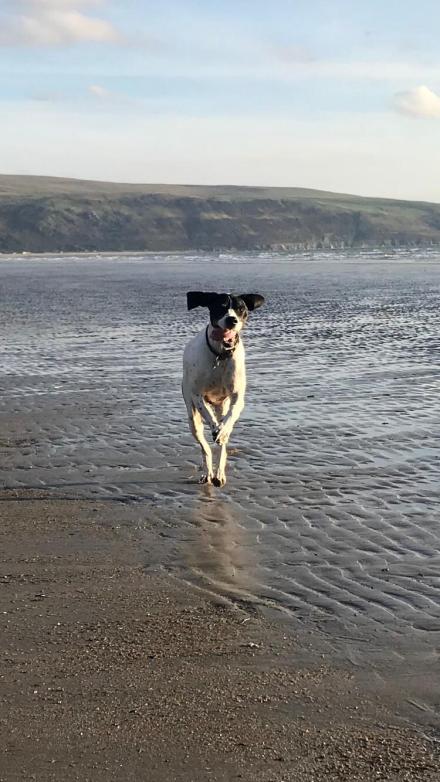 Registration was a bit chaotic, as expected with almost 800 people taking part, but once it had been done we had a walk around the town. 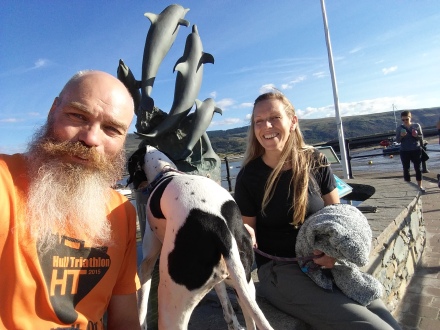 End of September, and the weather was fantastic. We walked back along the beach the campsite and had an early night. Even though it had been sunny all day, overnight the temperature dropped to 3 degrees, so we were happy in our snug little pod.

Coffee and breakfast, followed by another gentle walk into Barmouth. The swim wasn’t the only event, there was a run-swim, with an 11k run from the finish back to the start before doing the swim, and just a run from the start to the finish. I had decided against the run-swim as I wasn’t sure how much time there would be between the two events. In the end there was almost an hour from finishing the run and starting the swim, so I would have been OK. We cheered on the first runners returning to Barmouth before I changed into my wetsuit and dropped off my bag to be transported to the finish. The organisation couldn’t be faulted with so many helpful volunteers. I was also cheered by how many people seemed to know so many others, it all felt like one big family. 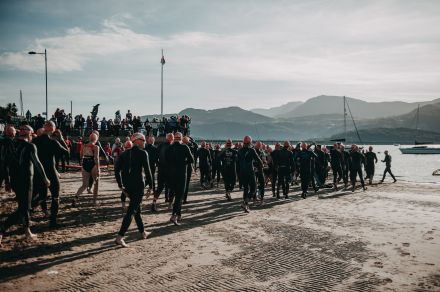 With so many people the start was split into four waves, slowest first, speedy people last. The start was also very relaxed. Over the timing mat and a gentle walk into the water, the complete opposite of a triathlon start. Maybe the fast wave ran into the water with gusto, but the wave I was in definitely didn’t. 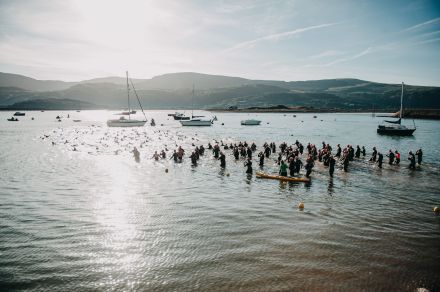 The initial shock of the cold water took my breath away, even with my beard, but it felt good to be off. Within minutes we were under the bridge. Quite a few people rolled onto their backs to wave at the hundreds of supporters on the bridge as we were swept with the tide. 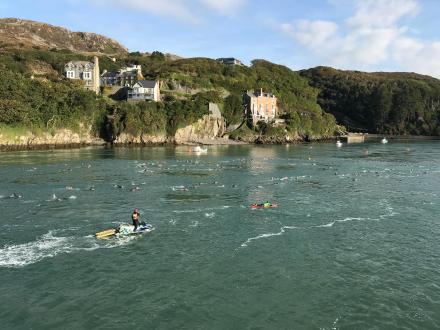 My wife and dog were on the bridge as they were walking to the finish, although I didn’t spot them. Nelly had a bit of a fright when a train went past, but she has been known to be scared of her own shadow.

The timing of the swim is difficult. If the swimmers are set off too early then there won’t be enough water in the estuary, too late and the tide will turn making the last section very tough. After half an hour I spotted a few people standing up, and then my hands started to drag on the sand. I walked with everyone else for a few moments, taking the opportunity to look at my Garmin. 3000m in 30 minutes! I put it down to GPS error as there was no way I could have swum that quick. I continued to swim, guided by paddleboarders and jetskiers. 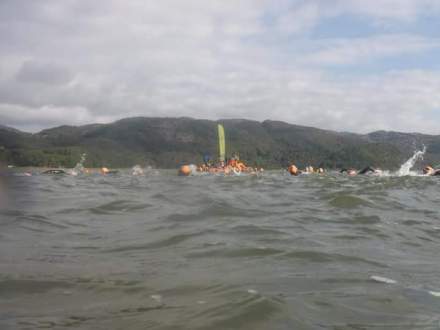 There was a feed station at the half way point, which I completely missed, thinking it was a boat. I was a little concerned when I looked at my watch on the next sand bank and it said 7000m. If I hadn’t seen the feed station by 7k it was going to be a very long swim. There was one final sand bank at 9000m, where the tide was so strong that I couldn’t stand up.

We rounded a corner and I could smell the bonfires at the finish. This was very welcome as my hands were numb with the cold. Minutes later and I was climbing out of the water, handed a blanket and a welcome hot chocolate. I quickly changed and soon managed to get some feeling back into my hands. There is no way I could ever swim that in skins, so I doff my hat to those hardy folks who did. 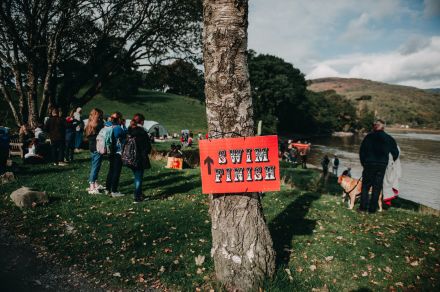 Once changed I hunted for my wife. There were stalls with cake and Helen had the money. It had taken her longer to walk the route, but when reunited yummy cakes and coffee were purchased. The organisers had put on buses to transfer everyone back to Barmouth, although Nelly isn’t too keen on buses, which she let everyone know by letting out a truly noxious pump. Thanks old girl.

Back in Barmouth and I inhaled fish and chips before heading back to the campsite for a few beers and another early night. 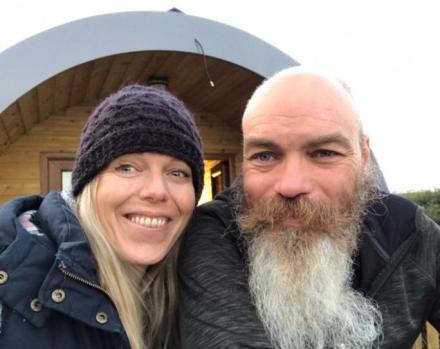 My finishing time on my Garmin was 1 hour 36 minutes with a distance of 9661m. My official time was 1 hour 39 and 133rd. Without doubt the fastest swim I will ever do and probably the equivalent of a 5k swim in a pool. I loved the whole event and will definitely be back in 2019. Helen has also stated that she intends to have a go as well. A medal or some bling at the finish would have been nice, although a blanket is far more practical.

I can’t recommend this event enough. If you’ve ever fancied a longer swim, this is the one for you. If you can manage an Ironman swim then you can easily complete the Hurly Burly. See you all next year.

One thought on “Hurly Burly”