My beautiful and amazing wife has entered the Lakesman Half Triathlon this year, which is in four weeks time. Helen wanted to ride the bike loop to have a look at it and to make sure that she can make it back for the run within the time limit. I’ll let you in on a secret, she’ll have absolutely no worries about the time limit.

I downloaded the route, we loaded up the car and headed off nice and early this morning (Sunday). Arriving at the carpark in Keswick where the race will start and finish, we found it to be nearly full. Unbeknown to us, the Keswick Mountain Festival was on, with fell races, walks, sportive and a swim all occurring over the weekend. I mention the swim because there wasn’t actually a swim. It had been cancelled due to a harmful algal bloom in Derwent Water. Lakesman are aware of the situation and are monitoring the water, but there is a possibility that the races might have either shortened swims or no swim at all. Currently refunds or referrals are not being offered. This is a difficult situation for the organisers with plenty of people venting their anger on social media. I think that it is sensible to ere on the side of caution, and it the water is deemed to be unsafe to swim in, then you have to accept an altered race. Worst case scenario, the race goes ahead while there is some doubt about the water,  and if a few triathletes fall ill people will want to know why the swim leg wasn’t cancelled.

Back in the carpark once we had set up our bikes we headed off, straight through the sportive. Fortunately they were all turning right at the very first junction, while we headed out of Keswick and onto the A66 towards Cockermouth. This isn’t a road I would normally ride on, but it wasn’t too bad on a Sunday early in the morning, although it was a bit boring. After ten miles we turned left onto a smaller road, which was actually worse than the A66 as it was narrower, leaving less room for cars to overtake. Soon though we turned off this onto a very pleasant country lane, with a great descent into Branthwaite. Best section of the route by far.

Joining the A595 there’s a great view of the Irish sea, and with over half the bike leg completed you’re nearly home. The route then does a loop through Distington and back along the dual carriageway. This again wasn’t too bad as there was plenty of room for us. Unfortunately the A595 back towards the A66 was fast with little room, so we opted to use the separate cycle lane, which won’t be an option on race day. Once we reached the A66 we had a stop and a chat. The route back to Keswick will be fast and impossible to go wrong, so we decided to enjoy the ride and head back along some quieter roads. This was slightly longer and a lot hillier, but was a brilliant diversion, especially as for much of the time we could still see the A66.

Cockermouth was a revelation, with a wide street lined with trees. This isn’t an area of the lakes that either of us have visited, although I did a triathlon there many years ago, before Stava. Cockermouth; we will return. There’s also plenty of signs pointing to Maryport, which sounds like a classic Game of Thrones town.

If you’re going to cycle from Cockermouth to Keswick there really is only one route; up and over Whinlatter. 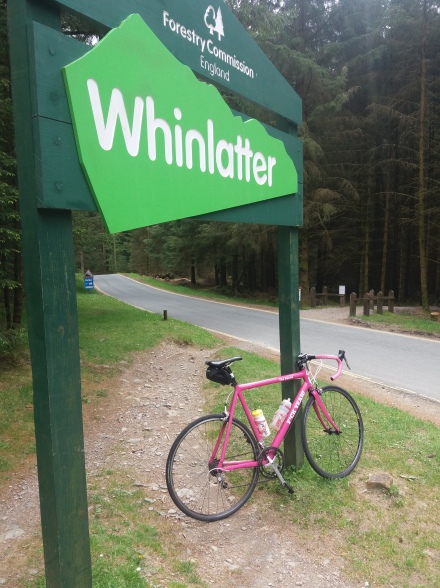 Whinlatter isn’t one of the ‘hard’ climbs in the Lakes, but it is still a bit of a beast, although we were climbing it from the ‘easier’ side. I had also never climbed it from this side. Helen wasn’t particularly keen on this hill, but the huge grin on her face after the glorious descent made it all worthwhile. Back into Keswick and once again we were mistaken for sportive riders. A couple of years ago we did the Tour De Bolton sportive and I was saddened by the dozen riders waiting outside the school gates to take part in the sportive without paying for it. I really hope that the marshalls didn’t think that we had done the same thing.

My thoughts on the Lakesman Half bike route is that most of it is on roads that I wouldn’t normally ride on, but on race day, with so many other triathletes on the roads it should be fine. The main roads also makes it easier for the organisers, with fewer marshalls required at critical junctions. I’ve chatted with people who have done Lakesman in previous years and they have all said that the roads were not an issue.

If you’ve entered Lakesman I wish you all the best in the world. As for me, I’m really looking forward to supporting my amazing wife as I know that she will surpass all of her expectations.

4 thoughts on “Lakesman Half – The Bike Loop”