Up early, bikes on the car roof, panniers in the back, we were on the road by 6.30am, heading to the ferry terminal at Cairnryan. We arrived in plenty of time, checked in, grabbed a coffee and waited to be told where to go with our bikes. 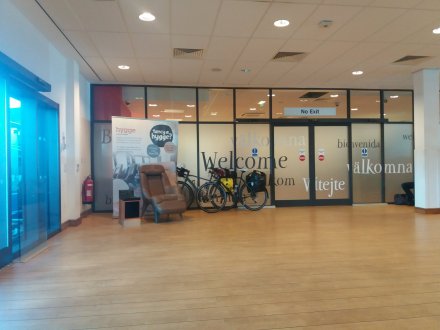 Once most of the lorries were on we were escorted onto the ferry. We were told to put our bikes into a funny little unused office. All the staff at the terminal were helpful and friendly, and unlike the Isle of Man ferry, we felt safe getting on and off.

We’d paid an extra £5 each for comfy seats in a secluded lounge, which was definitely worth every penny. We headed onto deck a few times to take photos, watched the news, lots of Brexit and Thomas Cook. One of the reasons for this little cycling tour is because we can nip over the border from Northern Ireland to the Republic of Ireland without passports, which we might not be able to do later this year. 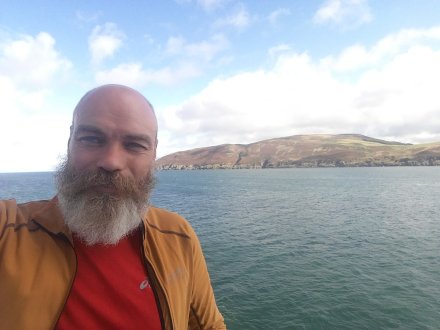 Back to the ferry, and the views were amazing. Coming into Belfast we could see Carrickfergus Castle and a huge power station. Once docked we went to retrieve our bikes only to find that the old office was locked. It wasn’t, it was a push door. Sometimes I’m an idiot 😀

Onto the roads and escaping the ferry terminal was a bit grim, as expected, but the next few miles were amazing as there was a dedicated cycle route along the coast. We even stopped for a closer look at the castle. Right out of Game of Thrones.

A couple more miles and we made it to our B&B with an incredibly friendly host.

First days cycling was only 17-ish miles, but tomorrow we will be cycling up the coast to The Giant’s Causeway. Great start to our little cycling adventure.

Day 2 can be found here.