Yesterday, the three of us spent a great day at Sticklebarn, Langdale in the Lake District. There was a whole weekend’s entertainment, with music, food, trail runs, a fell race and most importantly a couple of races with dogs. To add to the chaos, at the same time there was the Langdale marathon and half marathon. To say that the area was busy was a bit of an understatement.

We arrived nice and early, grabbed a coffee and waited for the start of the 10km trail race, which I was doing. The start was delayed by ten minutes to ensure that all of the marathon and half marathon runners would have made it over Stickle Bridge before we all crossed over it in the other direction.

The trail race started off with a fairly tricky section with a tough little climb, before settling into a rough and rocky route. I’m gradually improving with my off-road running, although you can easily spot those that run over this kind of terrain all the time as they literally ‘dance’ over the rocks. I managed to make up a few places on the flatter sections, but I was fairly tired by the end. I finished with a time of 54 minutes, only 8 minutes behind the winner, which shows how tough the route was. I also managed to pick up a prize of a very nice bottle of beer for being first Vet 50. However, I was over a minute behind the first Vet 60, and only 17 seconds in front of the first Vet 60 Female. Good little race though.

The main event, for me, Helen and Nelly, was the 10km tail trail race a bit later in the day. The organisers had decided not to take any more entries during the week before, as there was so much going on. Despite that, there were probably 20 runners with their dogs on the start line. The route was less technical than the trail race, but still had a good hill towards the middle. The race was relaxed with the emphasis on fun. Helen and Nelly set off in the middle of the pack with plenty of barking from other dogs. The start and finish of the route was out and back, so there wasn’t really opportunity for me to cheer them on during the race, so I joined the very long queue for a coffee.

I’d only just finished my coffee when runners and dogs started to appear, with Helen and Nelly smiling their way to the finish line. 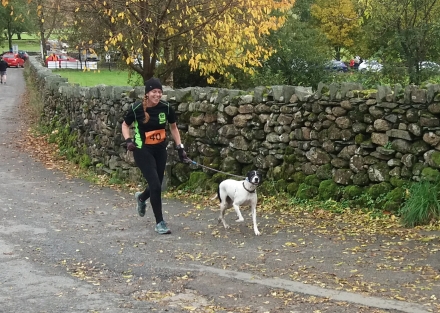 Helen was very pleased with her time of just over an hour, as running with Nelly isn’t the easiest job in the world. She gets distracted a lot.

If we’d had a campervan we would have stayed the night and enjoyed the music festival, which is what lots of others were doing, as over half of the carpark was campervans. It’s made us more determined than ever to get one.

As an aside, whenever we take Nelly somewhere we often get asked what breed she is, but up in the Langdale Valley, everyone seemed to know that she is an English Pointer. Definitely the best looking dog there. Overall it was a fantastic day and I fully expect us to be back next year.

One thought on “Langdale Octoberfest”