I managed to pick up this book from one of our visits to Barter Books (read about it here). It’s only recently been released and it was less than half price; bargain. 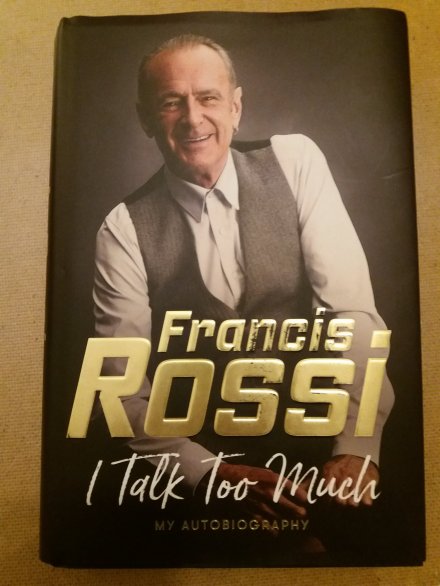 Obviously the book begins with his childhood, the formation of the band that would become Quo, the seminal meeting with Rick at Butlins, and their foray into psychedelia with their first hit Pictures of Matchstick Men, and the gradual change into heavy rock. Many fans argue that the 70’s is the classic Quo lineup with their greatest hits. I probably wouldn’t argue about that. Francis is also very honest about the split after Live-Aid and then waiting for Alan to jet home to Australia before reforming without him, with the inevitable court case.

I will be honest that in my teenage years I was a big Quo fan, although I will agree with the bassist Alan Lancaster that the single Marguerita Time was awful, which was probably when I stopped listening to any of their new material. That was until the 2011 album Quid Pro Quo which was released exclusively through Tesco.

I’m rambling, what’s the book like. Over 50 years in one band means that there are going to be a stories. Francis doesn’t shy away from examining his relationships with both Alan Lancaster, who he doesn’t like in the least, and Rick Parfitt who was like a brother. He also mentions the drugs, and just how much cocaine he was taking, to the extent that his septum fell out. Francis cleaned up and stayed sober and drug free; Rick not so much.

I don’t read the tabloid papers, so I never knew of the acrimony coming from Rick’s family towards Francis. Status Quo have continued without Rick, but they were touring and recording without him for a couple of years before his death. Rick was working on his autobiography before he died, so I’m sure a version of it will be published soon, as will Alan Lancaster’s.

Anyway, the book is brilliant, even if you only have a passing interest in the mighty Quo.