I have avidly read most of Mr Wilson’s books, and all of his Repairman Jack books. Read my many reviews here, here, here and here. 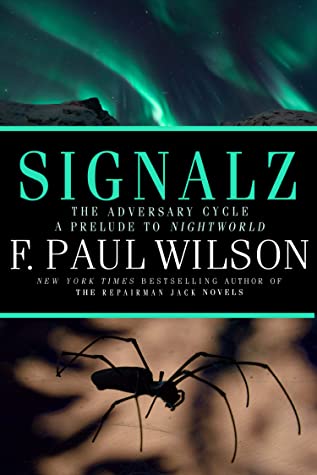 Before we start on the review of Signalz, the first thing to know is that if you’ve not read most of the Repairman Jack books, this is not the one to start with. Add to the confusion, Repairman Jack isn’t even in this book, although everything in this book occurs days before Nightworld, the final Jack book.

Most of the characters in Signalz have appeared in other books as bit part players. We have Russ Tuit’s brother, Ernst Drexlar, the writer Frank Winslow and the Native American from The Last Christmas. There are three different stories in Signalz, but as with all good Paul Wilson books, their stories overlap and become entwined. However, sometimes it feels like you should now more about certain characters. It is possible that some of them have appeared in other books which I haven’t read.

The main thread is the ‘signalz’, other worldly communications emanating from unknown places, but having been recorded since 1941, the year that ‘The One’ escaped from his prison in a Romanian keep, as written about in The Keep, a very scary stand alone horror novel. Anyway, these signals are drawing together, implying that the end of the world is about to begin.

As I said, this is a book for the fans only, and I loved it, even without Jack. I also enjoy how Paul Wilson doesn’t worry about inserting new books into an established series. Signalz occurs days before Nightworld, even though the first version of Nightworld came out almost 30 years ago. There is a great deal going on in Signalz, which could indicate that there are more books to come. Last Christmas inserts itself into the series with another three or four books after it. One reason I like this is because it means that we might get more Repairman Jack books in the future. Here’s hoping.

Anyway, I gave the book 5 out of 5 on Goodreads.

A while ago I mentioned that one of the reasons for getting a new Kindle was because there were a couple of short stories by F Paul Wilson that weren’t available in a physical form. The review of those two shorts can be found here and a wider Repairman Jack review can be found here.

Upon searching I found a couple more short stories from my favourite author. These two do not feature Repairman Jack, but they do exist in the same reality, with links to the ‘Otherness’.

The Peabody-Ozymandias Traveling Circus and Oddity Emporium, with it’s main character Oz, was first introduced in the short story The Last Rakosh which later morphed into the full length novel All the Rage, and is undoubtedly one of the best books from the Repairman Jack universe.

The events in the Oddity Emporium occur a year or two after All the Rage, and involves the circus travelling around the country looking for parts of one of the Infernals, which when put together will hopefully span a bridge between our world and the ‘Otherness’. It is a great little read, but it is definitely one for the Repairman Jack fans only as many of the references would be lost on the casual reader.

Wardenclyffe is again set in the same reality where Repairman Jack exists, but it is set over 100 years ago, mixing fact with fiction. Although, there is a great deal that we don’t know about Nicolai Tesla, the main protagonist in the story. Tesla was a genius, of that no one would argue, but here he is attempting to enable broadcast power, free unlimited energy for the whole world. He is struggling financially, where upon the mysterious ‘Order’ help with the funding as they are optimistic that Tesla’s work will also bring about a bridge spanning our world and the ‘Otherness’.

Again another story that I enjoyed, with similarities to Lovecraft, but again also one for the diehard fans of the ‘Secret History’.

If you are intrigued by the Repairman Jack series of books, the place to start is with The Tomb, either the original published in 1984, or the slightly updated version from 2006.

About 18 months ago I blogged about the Repairman Jack series of books by F. Paul Wilson (read about it here). Even though the whole story arc has been completed, Mr Wilson does like to surprise us. In this instance he has released a new book set between the books Ground Zero and Fatal Error. I’m never going to complain about another book, especially as this opens up the possibilities of more new books, also set between books already released.

In this book Jack is tasted with protecting one of the Infernals, although he doesn’t know that, plus an old character from The Tomb reappears with a referral for another job. Obviously both jobs are not what they seem and almost inevitably the clash.

As with most Jack books this is a great read and one that I couldn’t put down. I normally hate having to use the train to get to work, but it did mean that I could spend an extra couple of hours reading.

My only gripe is that the book does appear to reference characters and items that I feel that I should know about. I know that I’ve not missed any Repairman Jack books, but looking on Amazon and the F. Paul Wilson forum it would appear that there are a couple of short stories that I’ve missed. I promptly purchased them for my Kindle, which has now stopped working. It is a 3rd generation Kindle from 2010, so maybe it’s time for a new one. I’ve tried resetting and restarting it to no avail.

Back to the book, and if you’re not up to speed with the series, this one isn’t a good place to start, although it is more ‘stand alone’ than others. As I mentioned in my review last year, The Tomb, the very first book, is one of the best horror/thriller books out there.

One of the reasons that I’ve not been blogged as many book reviews as I used to is because I’ve been re-reading the Repairman Jack series of books by F. Paul Wilson. 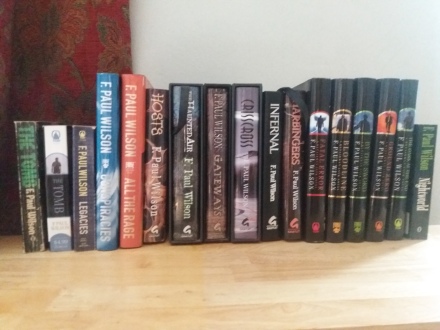 There are 16 books in the series (I think), with a couple of collections of short stories, and six books detailed the main characters life before the first book.

The first book written, (not the first book chronologically) is The Tomb, which I first read 30 years ago and was given to me by my uncle. I loved it and immediately picked any other books written by the author, although apart from The Keep, none of them kept pace with the exciting roller coaster ride that is The Tomb. A few years later the author wrote a series of books known as The Adversary Cycle, where in the final ‘end of the world’ book, Nightworld, Jack makes a welcome return, albeit as a minor character. Nightworld was first published in 1991.

For those of us who were big Repairman Jack fans, that seemed to be it, but then 14 years after The Tomb, a second full Jack novel was released. Then over the next 15 years another 13 books were published, before wrapping the whole series up with Nightworld.

Of course by the time the events in the original Nightworld came around, many other life changing incidents had occured, meaning that F. Paul Wilson heavily re-wrote Nightworld so that Jack was now a major character. Also, in 2004, the author decided to re-publish The Tomb, but this time updated with references to computers, DVDs, emails and an additional 30 pages.

Who is Jack though? He fixes situations for people, similar to The Equalizer, but not doing it for free. The Tomb was first published at the same time that Edward Woodward was on the small screen as the Equalizer, not the Denzel big screen version. The books are part thriller, part supernatural and part horror.

Not every book in the series is a killer, but personal favourites of mine are The Tomb, All The Rage, Hosts and Crisscross. There are some plot discrepancies as expect in a series this long. In The Tomb, we hear about Jack’s daily fitness regime and how he hates it, but never misses a day. This never gets mentioned in any other book. In By the Sword, Jack is recommended by a woman living in Maui, who was in The Tomb, but we only find out that she’s now living in Maui in Nightworld, where she admits that she thinks Jack is dead. If she thinks that he is dead, why recommend him.

In Conspiracies, Jack is hanging onto the roof of a moving car and with his free hand shooting into the car. The problem is that he is using his Semmerling, the worlds smallest .45, which has a manual slide, so you need to use two hands to fire it a second time. Minor stuff I know.

In one book Jack comes across a struggling author, with a very similar name to F. Paul Wilson, writing a series of books about Jake Fixx, detailing Jacks life. The TV series Supernatural had a similar plot, and Stephen King added himself as a character in his Gunslinger series.

An interesting aside is that F. Paul Wilson owns the digital rights for all of his books, and has done way before digital books were a thing. This means that he publishes the e-book version himself. In an interview he mentioned that even selling an e-book on Amazon at less than £3 or $3, he makes more than he does with a hardback. Well worth buying. I get annoyed at publishers trying to sell an e-book with a huge mark up (Game of Thrones anyone).

If you’re interested in the Repairman Jack series I would recommend starting with the 2004 version of The Tomb, either digital or in print. The older version of The Tomb can often be picked up very cheap and it is a cracking read.