The last of the four Mortal Engines series, and it neatly wrapped up all of the loose ends from book three. Reviews for the first three books can be found here and here. 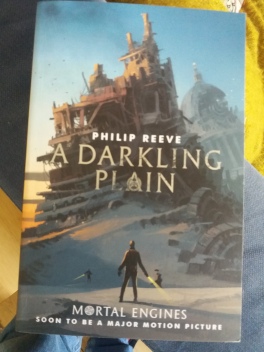 Once again I don’t want to write too much about what happens in the final book as it would give away what happens in books two and three. Suffice it to say all of the main characters are there, including Shrike, who was permanently killed by Tom in an earlier book, and has been resurrected (again), although with some quirks. Hester is there, as expected, and Tom and her paths cross over, missing each other at crucial junctions, as does their daughter.

I have really enjoyed all of the books in this series, and although they can be found in the ‘Young Adult’ section of a book shop, they are not in the least bit immature. The whole idea of a wasteland with huge moving cities hunting and devouring smaller cities fascinated me, and as soon as the film is released on DVD (or Netflix) I will make sure to watch it.

Films are rarely as good as the book, with the exception of The Shawshank Redemption, but with Peter Jackson involved in the production it could well be quite good. I missed it at the cinema so please don’t tell me if it is rubbish.

I have toyed with buying the Illustrated World of Mortal Engines, but however well everything has been imagined and drawn, it won’t look like how it all looked in my mind.

Final question is, should I read the other four books set in the same world?

It was only a week or two ago that I reviewed the first book in the Mortal Engines series by Philip Reeve (read the review here), but I have now finished the second and third books, Predator’s Gold and Infernal Devices, respectively.

Predator’s Gold starts off only a year or two after the end of Mortal Engines, with Tom and Nester flying the skies in their airship. We meet one of the oldest ice cities, traveling the northern routes which has been devastated by a plague and more recently by unexplained thefts and ghosts. Tom and Nester take on board an explorer called Pennyroyal, whose books are more fiction than fact. I don’t want to give too much away, but much like Mortal Engines this is another excellent book.

Infernal Devices is set 16 years after the end of Predator’s Gold, with Tom and Nester living a quiet life with their daughter Wren. Everything goes pear shaped when Wren is kidnapped and Tom and Nester try to rescue her, ending up on Brighton, a floating holiday city. Amazingly, Pennyroyal has landed on his feet and is the mayor.

I love the whole idea of vast cities on wheels, moving around the landscape, devouring smaller cities or suburbs. I sometimes struggle to take in the whole imagery, almost as if my mind isn’t able to cope with it. For that reason alone I would love these books, but the fact that they are well crafted as well makes the whole series brilliant.

As you might have guessed, I’ve already started the fourth and final book.

A couple of years ago I was asked to give a talk about air quality at at local Data Science Meet. They use the App Meetup to organise events, which I downloaded, although there hasn’t been another meeting for ages. Back to the App and I stated that I was interested in book clubs, so every few weeks I get a notification that the Post Apocalypse Book Club will be meeting in Manchester, and what book they will be discussing. I’ve never made any of their meetings as Manchester is a bit far to go to on a Tuesday night, but the book that they were due to discuss a couple of weeks ago caught my eye. As you might have guessed it was Mortal Engines.

Within a couple of pages I was hooked. The imaginary of cities moving around a desolate world, devouring smaller and weaker cities had me completely. Set far into the future after most of the world was destroyed in the 60-minute war, scavenging is a way of life for the nomadic cities. The book is mostly based upon London, a weary old city with a slightly unhinged mayor and a loyal archeologist, who might have found some ancient technology that could benefit old London.

I don’t want to give too much away, but as I said earlier, I was hooked big time. So much so that I have ordered the other three books in the quartet, and I am happily working my way through the second one. Book review to follow soon I’m sure. I will also have to look out for the film, which apparently was released last year.