I’ve blogged about Wigan Train Station in the past where I mentioned about the new code and security for the cycle store (read about it here). This morning I saw a notice taped to a couple of bikes.

This is good, as it can be really frustrating not being able to park your bike because there are bikes that have been dumped and never move from one week to the next. If you’ve ever lived in Oxford or Cambridge you’ll understand how many bikes are abandoned, so it’s good that Wigan Station are doing something positive. 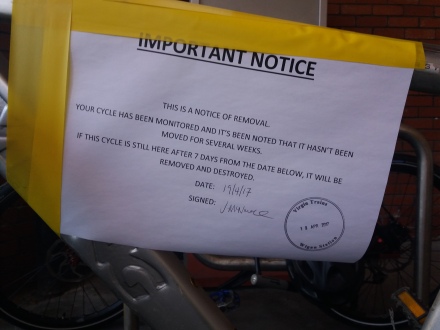 The bikes in question are old and cheap and they could have been used as an excuse to be in the bike store, pretending to unlock a bike, but in reality eyeing up other bikes.

Next on the agenda must be to stop people parking in the short stay disabled spaces.

Half of my daily commute is by train, the other half by bike. Instead of taking my bike on the train every day (I’ve had some problems, see here), I leave it (him) a couple of nights a week in the secure bike storage area at Wigan train station. I use two large D-locks and my commuting bike is old and undesirable, plus, as you can seen in the photo below, there is often a Police van parked there.

Tuesday morning when I punched in the code for the bike area, nothing happened. I tried a couple more times but it was obvious that the code had been changed. I went back up onto the platform to customer services, who directed me to the ticket office. Before I was given the new code I had to show my train tickets, some ID, my postcode and then sign a form. Apparently the bike storage area had been abused. No complaints from me if it’s a bit harder for thieves to obtain, although I’ve not had any problems in the six months that I’ve been using the area.

When I returned to put my bike in the lock-up later that afternoon, I had obviously forgotten the new code. I should probably write it down before I forget it again (too late).

I’ve blogged about the unusual Greater Manchester Air Quality Management Area (AQMA) before, (https://beardsandtriathlons.wordpress.com/2017/02/12/commuting-and-air-quality/) and I’ve shown part of it once again, focusing on Wigan town centre. The green splodges are sections of the AQMA. I get to cycle through this twice a day.

The AQMA suggests that the air quality in Wigan is poor, but are there any monitored results? I’m glad you asked me that, because according to the Greater Manchester Air Quality website there are quite a few diffusion tubes in the area. I know this because I have read the 2016 Annual Status Report. This report states that because there are 260 diffusion tubes in Greater Manchester, the results are not in the report, but in an attached file and in the appendix. The attached file isn’t attached, obviously, and the appendix isn’t available online. I have emailed a couple of times, but I haven’t had a reply yet.

Without monitored results, let us assume that the air quality in Wigan is poor, hence the AQMA. So, why is the air quality in Wigan poor? Many of the buses are old and have high pollutant emissions. When London, Guildford and other more affluent areas down south invest in new buses, where do you think the old ones go? They gradually migrate north, to Wigan, Sheffield, Barnsley and eventually onto Inverness.

Buses though, only account for some of the pollution. A much larger proportion comes from cars. If you’ve ever had the misfortune to drive into Wigan, you would be able to testify to the fact that cars are everywhere. Most of them are moving slower than I do on a bicycle, with congestion and tailbacks the norm.

The above image is again Wigan town centre. In this small area there are 12 car parks, as well as on street parking on almost every road. An easy and quick win would be to close a few of them. If there is nowhere for people to park they might walk, cycle or use public transport. Alternatively, they might go somewhere else, and Wigan can’t really afford to lose jobs, shoppers or tourists. Studies have shown that non car drivers actually spend far more in local shops, so making Wigan less car centric would actually benefit the city, but just try telling that to local Councillors.

The car parks could be phased out over a number of years, in conjunction with improving facilities for pedestrians and cyclists, adding bus lanes and generally making the place nicer. The solution is there, right in front of our eyes.