The title of my blog is beards and triathlons, so I thought that it was about time that I had an entry about beards. Two weeks ago I travelled down to Bath for the 2014 British Beard and Mustache Championship. It was a fantastic weekend. I met many old friends and made many new friends. In the pub the night before I met a man with a beard so long he has to throw it over his shoulder when he goes to the toilet so that he doesn’t pee on it. I met a very drunk Norwegian with a beard, some Glaswegians, all with beards and a couple of guys from Liverpool, also with beards. There was a lot of beards, and some mustaches. 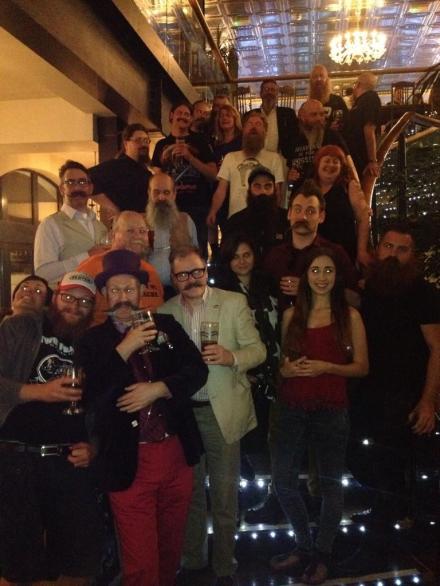 The night before the event there had been a casual post on the Facebook group about meeting in a pub in Bath. I arrived with the Norwegian, who was staying at the same hostel, and we both felt a little out of place in the pub, as we were the only overtly bearded people in the place. It wasn’t long before another beard arrived, and soon many more turned up, until we had definitely made ourselves known. I have what I consider to be a fairly good beard, but mine was dwarfed by the specimens there. I was suffering from beard envy.

There were beards from America, Germany, Italy and Australia. There were mustaches of all shapes and sizes, some styled, some not. There were also some very impressive bushy beards.

The next morning the was a parade through the streets of Bath, with all of the bearded people meeting up in one of the communal gardens. We stopped traffic as we all paraded to the Pavillion, where the competition was to be held.

I had originally entered the full beard with styled mustache category, but with over 30 other competitors I decided to change over to freestyle. With only three other beards I was in with a very good chance of a trophy, although mine was a very simple back combed beard.

I was going with a simple spread out look. My beard naturally wants to part down the middle due to all of the cycling and swimming that I do, so my plan was to extenuate this look. I was also going for the natural freestyle look, as I didn’t use any hairspray, gels or waxes, all of which are perfectly acceptable in the freestyle category.

Two hours after registering the main competition began, starting with four mustache categories. Up next was four partial beards categories before finishing off with the full beards. There were four classes here, full beard with styled mustache, full beard less than 12 inches, freestyle and lastly the big boys, the class everyone wants to be in, full beard over 12 inches. Size matters.

Every competitor also received a quality goodie bag, containing enough beard oil and mustache wax to last me for a few years. There was also a competition for the ladies, with best fake beard, as well as another competition for children.

So how did I get on. Well, considering that there was only four freestyle beards, I would have been disappointed not to have won a trophy. I managed third, which I was well pleased with, especially as first and second had spent a couple of hours styling their beards, as opposed to the five minutes mine had taken. 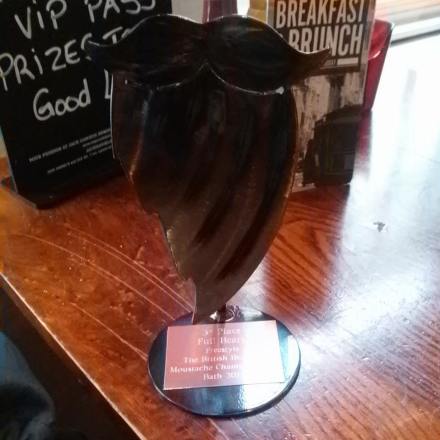 Once the competition was over, I headed off to get some food before meeting up with the Liverbeards and Glasgow Beard club for a few more drinks in a Bath. The next morning I had a long train journey home, with a hangover from hell. I can’t wait for the next one.

After my previous failed attempt at Everesting (read about it here) I prepared myself for another go at it, although on a different hill. Friends had given me plenty of suggested climbs, but I opted for a smaller hill close to Lancaster. Condor Bottoms isn’t very long but it is quite steep and is used by the local cycling club for a hill climb every September.

Condor Bottoms has an average gradient of about 7%, but as it is quite short I would have climb it over 100 times. I had a practice ride a few days earlier where I did 8 repeats, so I knew the hill well. I intended to Everest on the August bank holiday Monday, but the weather forecast was for rain, so I went for the Sunday. The night before I packed up a small rucksack with extra water and plenty of food and then at 4 am I jumped on my bike and cycled to the top of the climb.

I dropped my bag behind a gate at the top of the climb, pressed start on my Garmin and at 4:20 am rolled down the hill for the first rep of the day. It was cold, very cold. I had worn a long sleeved thermal top beneath my cycling jersey, but I hadn’t expected it to be this cold. Before I’d even finished one rep my hands were frozen, but I didn’t have any gloves so all I could do was man-up and wait for sunrise.

The first couple of hours was OK, apart from the cold, and I had my first break as the sun rose when I had climbed almost 2000 m. It wasn’t long after this when I saw my first cyclist, another guy from COLT out on an early morning training ride. He waved, wished me luck and headed off. A bit later Mark turned up and ended up cycling with me for over ten reps. The Prof, Teacake and Sue, all from Garstang cycling club also soon arrived, although they all had plans for the day and only rode one rep with me, but it was a real lift to see other people.

Mentally one of the hardest points was after I had climbed 3000 m. On a regular ride this would be a fair amount of climbing, but today it was only just a third. I really wasn’t sure when I set off if I would be able to complete the ride, but I was determined to get further than the failed attempt, and to at least climb more than I had ever climbed in one ride, which was 5200 m during last years Bowland Badass.

There isn’t much to add about the cycling, rep after rep after rep. By mid morning I knew every bump on that hill, and could descend it like a pro. I had got myself into a nice rhythm and was slowly ticking off the reps. What made it manageable was the amount of supporters who turned out from COLT. Jack and Niamh turned up with some cake and then stayed almost the whole day. Howard probably cycled at least 25 reps over the day, keeping me company. Bob from the Lancaster cycling club drove up and took a few photos. Stu arrived in his AA van, and stayed for a few hours. Podge turned up to chat with Jack and again stayed until the very end. Brett and his wife drove up also to give me cake. Can’t have too much cake.

Big Kev turned up to ride with me for a few reps and then returned later in his car, blasting out The Eye of the Tiger as he drove in front of me. Ian came a bit later straight from completing a very tough undulating time trial. He was then knocked off his bike on his way home. That wasn’t going to stop Ian and he returned towards the end along with his lovely wife. Louise arrived a bit later with a homemade fruit smoothy, which was much appreciated. Matt, who had ridden with me on my failed attempt came out to shout abuse at me. Jim rode a few reps with me and gave me some OTE gels, which taste nice and are easy on the stomach (I’ve run out, can I have some more?).

It was about the middle of the afternoon when I started to feel rough. I’d done just over 6000 m of climbing, but I was now cycling on my own and was struggling. Podge, the only person still standing at the top, put a call out on Facebook to other COLT’s to come and join me as I needed the support. Non-COLT member Richard was the first to turn up, soon followed by Kev and Ian, who all cycled with me to the end. Niamh and Jack turned up at the top again, all smart as they were going out. Howard returned with his wife, as did Julie, Ian’s wife, who brought out a full chicken roast dinner and homemade crumble.

With that to come there was no way I couldn’t finish, and slowly I neared the magic number of 8848 m. By this time it was getting dark again so for the last couple of reps Howard drove behind the four of us, until I realised that I only had one more rep to do.

When I finished I had to helped off my bike and struggled to smile as I was so completely spent. I had completed 113 reps of Condor Bottoms. After a couple of photos, where I look terrible, Ian and Julie loaded me and my bike into their van and drove me home, along with my roast dinner. Very appreciated.

Obviously the first thing I did when I got home was to upload the ride to Strava, just to make sure that I hadn’t miscalculated. 150 miles and over 16 hours is a long day on a bike, and I am proud of my achievement, but I can guarantee that I won’t be doing it again. If friends want to have a go then I’ll come out and support, but once was enough for me. A few days later and my name was added to the Hall of Fame on the official Everesting website and then a few weeks later Laurie contacted me to write a report as he had created a blog for any UK Everesting attempts. It’s taken me almost a month to write this report and I’ll end it to say that I couldn’t have done it without the support of everyone who turned up to ride with me, hand me food or drink or cheer me on. A big thank you to you all and sorry if I’ve missed anyone.