Day 5 and our last day in Reykjavik. It’s gone too fast. To make the most of our last day we were up very early and walked half a mile to the nearest swimming pool.

Swimming is very popular in Reykjavik, with all of the pools heated geo-thermally. The biggest and best is called Laugardalslaug, which comprises a 50m indoor pool, a 50m outdoor pool, a large kids play pool, slides and flumes, and numerous hot tubs. There are also a few rules with regards to swimming in Iceland, which can be off-putting to some. You have to leave your shoes outside the changing rooms, leave your towel in a rack near to the showers, and then shower naked using soap, thoroughly, before pulling on your swimming costume and going for a swim. There is even an attendant present to ensure that you have showered properly. (Male and female areas are completely separate).

Once all of that was completed we walked quickly to the pool steps and went for a swim. It was dark outside, there was snow on the ground and it was minus three degrees, but the pool was just the right temperature. We even had a lane to ourselves for most of our swim. After a gentle 40 minute swim we quickly made our way to a hot tub to relax with the locals for a while. It was a fantastic experience, made even better as it was the first time that Helen had ever swum in a 50m pool, and only my second time. We were buzzing for the whole day, and we even made it back to the hotel before breakfast had finished.

Once packed we left our cases in reception and headed into the centre of Reykjavik to visit the settlement exhibition. A viking farmhouse had been excavated in 2001 and the museum was built around it. It has been estimated that people lived in the farmhouse between 930 and 1000 AD. There was also loads of information about the vikings in general, and how they arrived in Iceland. There were no indigenous people living on the island before the vikings arrived, and many used Iceland as a stop-over before exploring Greenland, Canada and possibly America.

From there were returned to the harbour for a warming Icelandic Coffee, made with the local schnapps. With time against us we jumped on a sight seeing bus, which I have to say was a bit rubbish. It was expensive, even by Iceland standards, with a poor commentary and windows so dirty you could hardly see out of them.

From there it was back to the hotel and onto the airport, spending the last of our Krona on chocolate and dried fish snacks. Due to storm Ciara our flight was delayed by an hour, and the landing was slightly bumpy, but it was good to be home.

Overall we would definitely go back to Iceland, probably one summer. Things we would change next time include more swimming and definitely not going on the sight seeing bus. Our trip also included a trip to the Blue Lagoon, without entry, and we all agreed that we were not bothered about not going, especially as the Secret Lagoon was so good. The reviews of the Blue Lagoon are very mixed. Iceland and Reykjavik are expensive, but it is well worth visiting, especially if you can find an out of season deal.

Definitely one of the best holidays we’ve ever been on.

The four of us strolled from the hotel into Reykjavik, stopping to take a photo of Helen’s mum outside the penis museum. I won’t embarrass her by sharing it.

The Whale museum was out on the docks, and was full of life size models of cetaceans. My favorite was the Right whales, named because they were the “right” whales to be harpooned. However, the shear size of the Blue whale is hard to get your head around, weighing in at 120 tonnes.

Helen’s mum and sister disappeared for a quick coffee before going on a whale watching boat trip. We stayed to look at the whale exhibits a bit longer, before finding some unhealthy baked goods.

As the cathedral was closed the previous day we returned and grabbed the lift for some views of the whole city from the top.

We then walked to the front to look at the relatively new viking boat sculpture.

Having been on our feet most of the day we popped into a cafe for a beer and a hot chocolate with rum while we waited for the return of the whale watching boat. The sea hadn’t been as rough, but Helen’s mum and sister had as much luck as we did, i.e. no whales were spotted.

We opted to stay in Reykjavik centre for a very nice meal in a bistro, including sharing some Iceland love balls for pudding. They tasted great, much like deep fried scone mix.

The bistro was opposite the famous Micro pub, which sells 80 different beers, many from Iceland. 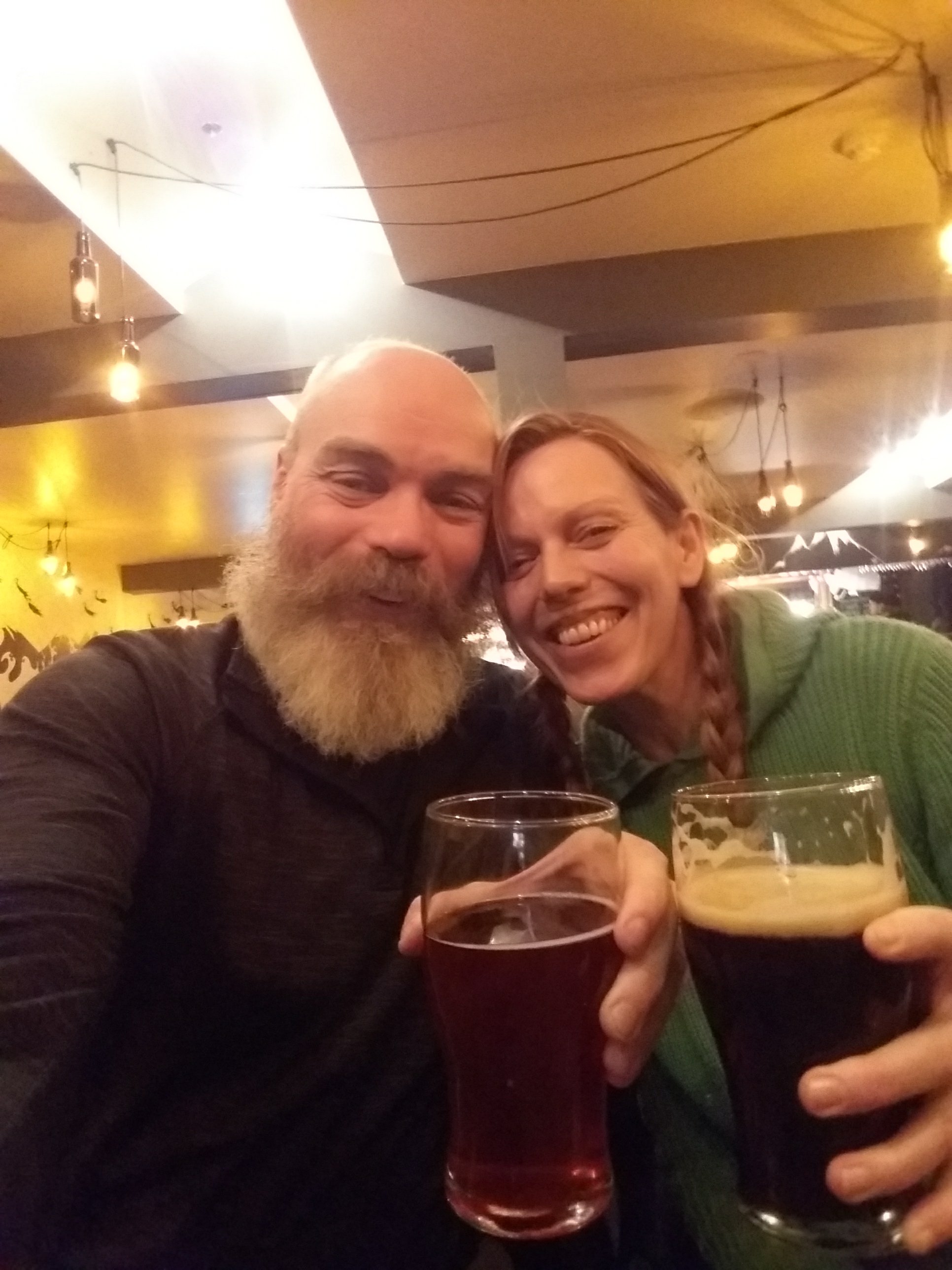 One large happy hour beer each followed by a taxi ride back to the hotel. Another brilliant day in Iceland.

Overnight there had been a little snow, just a light dusting, but the day promised to be full of Icelandic weather. The local saying is that if you don’t like the weather, wait five minutes and it will change.

We had breakfast with Helen’s mum and sister, who were doing the Golden Circle tour that we’d done the day before. Wishing them a good day we headed off the centre of Reykjavik, which was only 1 mile from our hotel. We passed the famous penis museum on the way.

Reykjavik was quiet with most shops not open. We admired Harpa, the city’s relatively new opera house.

The volcano musuem was closed, so after a coffee we visited the Northern Lights Exhibition, which had just the right amount of science to explain how and why they occur. There was also numerous pictures, displays and mythology, along with the opportunity to take a “fake” photo.

We had a quick look through the flea market before boarding the boat for a 3 hour whale watching trip. Free seasickness tablets were available as it was going to be rough. I took one, hoping that I’d be OK. Full waterproof suits were available, much needed as it got very cold on deck.

Amazing views of the snowy mountains as we headed out into Faxafloi (Reykjavik Bay). The sea was indeed a bit rough and I wasn’t feeling great, as I focused on the horizon.

The collective name for whales, dolphins and porpoises is cetaceans, and the ones we might see were Minke whales, Humback whales, White-Beaked dolphins and the Harbour porpoise.

Suddenly we spotted a harbour porpoise right in front of us, and then again a couple of seconds later. A harbour porpoise is about the same size as me. The captain steered the boat around, looking for whales, but unfortunately that was all anyone saw before it was time for the boat to make its way back to the old harbour. We were disappointed not to see a whale, but this is nature not a zoo. As with the northern lights tour, they offer people the opportunity to go again without paying within two years, which is a nice gesture.

Back on solid ground we went to the bakery inside the Exeter Hotel for some excellent sugary fried doughnut style goodness.

Feeling better we walked to the cathedral. Unfortunately it was closed for a concert later that day.

We walked back to the hotel, via Netto for some snacks. After a short nap we met the others in the bar for a drink. As expected, they had absolutely loved the Golden Circle. Another great day had been had by all.

What an absolutely amazing day. Our holiday included a day long trip around an area known as The Golden Circle.

The first stop of the day was at the Pingvellir National Park, which is part of the Icelandic rift valley. Iceland is in the middle of two tectonic plates and is splitting apart at the rate of approximately 2cm a year. The coach dropped us off at one car park and we walked down through a canyon to a second car park less than one mile away. Amazing views, a small waterfall full of large lumps of ice, and an area that was filmed in Games of Thrones.

Second stop was at Geysir, site of the best geysers in Iceland. The largest, Geysir itself, stopped venting a couple of decades ago, but the smaller Strokkur vent erupts every 6 or 7 minutes. I managed to take a photo just as it was venting. Helen, my beautiful wife, was almost reduced to tears by how stunning the area was.

Then onto Gullfoss, a waterfall which drops into a narrow canyon. It was windy and the only point of the day where we felt a bit cold. Up near the car park you could also see one of Icelands glaciers.

As we were a bit ahead of schedule we had a quick stop to look at some Icelandic horses. A very hardy breed who are slightly smaller than a regular horse, but live outdoors most of the year. Horse meat can also be found in most supermarkets. Eating horse was often a necessity for the early settlers and today it is veiwed as perfectly acceptable.

Last stop of the day was the Secret Lagoon. Icelands oldest swimming pool, heated by hot springs. The place is “low tech” and in our mind all the better for it. The atmosphere in the pool was relaxed and very friendly, with people floating about, chatting, or drinking beer and wine.

Some areas of the pool near to where the hot spring water trickled into the pool were too hot to stay in for long. Some of the group on the tour opted not to go in, mostly because of the strict showering and washing that is required. The pools don’t use chlorine, so everyone has to be ultra clean before going in. It was their loss, as we could have stayed there for hours.

One of the best days ever!

It was an early start, 3.30am the alarm went off. A quick cup of coffee and we were on our way to the airport by 4.30. Our flight wasn’t until 7.45, but airports are never as quick or as exciting as they should be.

A bumpy landing and we were in Iceland. I’d had a look at the map of Reykjavik and said to everyone that as it’s only a couple of miles to the hotel we should get a taxi. Wrong airport. 45 minutes later and a £100 taxi ride we’re at our hotel. Easy mistake, and as there was four of us it wasn’t that much more than the bus.

Our rooms weren’t ready so we had a snack in the hotel restaurant. Janet, my wife’s sister, asked how much the wine was. £8 sounded very reasonable, so she ordered a bottle. Turns out that was for a glass and the house wine was £35 a bottle. Welcome to Iceland 😀

Once settled in our rooms we went for a walk to see the natural harbour, with the snow capped mountains in the background. Very Icelandic.

Our package included a few excursions, and the first was a trip to see the northern lights. I was particularly excited about this being an atmospheric scientist. Helen had been looking at Auroura watch and there was a good possibility that we would see the lights. Unfortunately it was very cloudy and there was a full moon. We’ll just have to come back another time.

Absolutely shattered after a very long day we were asleep within moments of getting back to the hotel. Tomorrow is a full day around the Golden Circle.