Yesterday me and my beautiful wife took part in the Le Tour De Bolton Sportive, organised by Epic Events. You might think that a bike ride around Bolton might not be too much fun, but it’s not an area that we cycle around very often. In fact, Helen hadn’t previously cycled a single segment over the whole 60 miles. We arrived nice and early so that we could be off first, as we didn’t want to be out too long. H was also worried about the hills, especially The Rake, which is described by Simon Warren in his iconic climbing books thus – catch your breath if you can and turn right into the almost impossible 25% stretch to the top. If that wasn’t enough, we also had to climb Crown Point, Anglezarke and Sheep House Lane, along with a fair number of less spectacular climbs, adding up to over 1600m of climbing.

The route and profile can be found here. 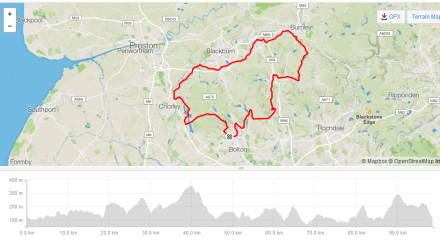 The start/finish was at a local school and as we set off out through the gates and onto the road I noticed a group of about a dozen cyclists off to one side who joined us as the moment we started. I know that some people like to ride sportives without paying, but at least don’t do it blatantly. Maybe wait a day or two, or even the following week. The event wasn’t that expensive and the organisers have spent many hours putting out all of the directional arrows, so don’t be a complete d*ck. Rant over.

The first few miles were busy with other riders, but fortunately very little traffic, so it was generally plain sailing until we hit The Rake. Although there was one guy riding a TT bike who was a bit wobbly. Not the bike for the course thought I. When we hit The Rake there were plenty of people walking near the bottom. H felt a bit trapped in and put on a burst to get some room, before reaching the very steep section. She didn’t quite manage all the way up without getting off, but made it far higher than many others. With a grin we continued, passing that one guy who hates to be chicked and just had to try to overtake us at any opportunity.

The feed stop was located in Oswaldthistle, and was busy but fully stocked with everything you could want, manned brilliantly by some local cubs and scouts. My brother-in-law was doing Velo Birmingham on the same day, and the first feed station had nothing left when he reached it.

We didn’t stop long, although I had the bright idea to tip my black coffee into my half empty water bottle. Lemon hydro plus coffee – not a good taste. Unfortunately the roads were now starting to get busy with cars and we also had to negotiate a couple of main roads, so it wasn’t until we hit the lower slopes of Anglezarke that we could relax again. Amazingly this was the first time that I had ridden the whole climb, and what a place for the official photographer.

We then turned onto Sheep House Lane for the last big climb of the day, although H nearly missed the turn. The Lane was also very busy with cars and motorbikes, combined with some very narrow sections of road. You can see why Ironman UK has such a fearsome reputation, as this Lane has to be climbed twice. We zipped down into Belmont, avoided a prat in a crap car, and made it back to the finish area with big smiles.

Epic Events put on some great events, including the Howgills Triathlon which I did last month (here), and it’s always good to be able to download the photos for free. We probably wouldn’t do this particular sportive again, but H does want to return to have another crack at The Rake. Finally, even though it wasn’t a race, my fit wife did manage to win her age group.

Walking Home from Mongolia is the second book by Rob Lilwall that I’ve read. The first one was reviewed here, where he cycled from Siberia back home to the UK, the long way. I enjoyed it, although there was a little bit too much religion.

In this book he decides to walk from Mongolia to Hong Kong, a distance of 3,000 miles. He asked his old friend Al to join him, but he was busy. Instead he was joined by Leon McCarron, who I reviewed here when he cycled across America.Leon wasn’t just going to walk with Rob, he was going to film it for a TV series.

As expected, they had some problems along the way, and as with Rob’s other adventure they didn’t always see eye to eye. A lack of Visas and extreme cold were other problems, but if I’m completely honest, I didn’t really enjoy this book. It didn’t make me want to go out on an adventure. It also came across that neither man was really enjoying the walk by the end. I think I’ll stick to cycling books.

I don’t just throw together these reviews randomly. The second book, Thunder and Sunshine is by Al Humphreys, and as you know, Al was Rob’s cycling buddy in Siberia. This is the second book by Al and you can read about the other book here. In this book he continues to write about his cycle ride around the world, mainly up the whole of the Americas. As with book review part VIII (here) there is once again the small problem of there being no roads between Columbia and Panama, although Rob does cycle through much of Columbia, and finds it to be one of the most welcoming countries he visits.

The most intriguing section of the book is the Siberian part, this time from Al’s perspective. I really enjoyed this book, which goes to show that I am definitely more of a cycling person and not a walking type of guy.