Last night’s hostel was pretty bad; dirty and in need of a good repairman. The only redeeming feature was that it was probably about £100 cheaper than staying at the Causeway Hotel. We headed off as soon as it was light, into the town of Bushmills. Unfortunately too early to visit the distillery. We changed our route slightly picking the direct ‘B’ road to Coleraine, only to hit the school run and commuters. The centre of Coleraine was also stupidly busy, but we found a great coffee shop.

We chatted to the guy working there, who was just old enough to remember a hard border with Ireland and soldiers everywhere. We’ve yet to meet someone who wants to leave the EU. He also recommended that we head towards Londonderry instead of the more direct route to Strabane.

After getting lost we found Windyhill road, which was both windy and hilly. We stopped in the next town, Limavady, for snacks, before embarking on the section we were most apprehensive about. Helen was in charge of today’s route and originally she had intended for us to catch a ferry across the inlet for Lough Foyle. Unfortunately it had stopped running the previous week. Therefore, to get to Londonderry from Limavady the only road is the very busy A2. There was a separate cycle lane for most of it, but as soon as we reached Greysteel we took the hillier backroads all the way to Londonderry.

An insanely steep hill dropped us into the city where we walked across the main bridge and found the brilliant cycle path alongside the River Foyle. Very reminiscent of the Lune. Rain had been forecast for most of the day, and here it came, although only for about 15 minutes. We were very fortunate.

The end of the cycle path took us onto a tiny little back road. We spotted the border with it’s disused army checkpoint. Scary to think we could go back to a hard border and not be allowed to cross where we did. 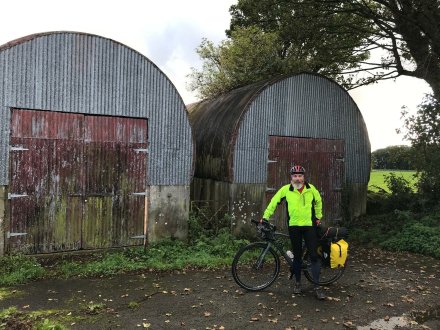 Suddenly we were in a different country. Subtle changes, but it was the first time I had crossed a border on my bike. I was just a little bit excited.

Before we knew it we were at the Rossgier Inn in Lifford, where we are staying tonight. We have the whole flat above the pub to ourselves. The kitchen is stocked with essentials, everywhere is clean and the shower is amazing. 5 star review to be added to Tripadvisor.

Today’s total was 91km with 900m of climbing and very little rain. Tomorrow we’re back in Northern Ireland as we head to Armagh with more rain expected.

Day 4 can be found here