The air quality in most UK cities is appalling. London has managed to exceed air quality objectives for the year by 5th January. Lancaster is no exception, with a large Air Quality Management Area (AQMA) covering the whole of the one way system, as well as a couple of smaller AQMAs in Carnforth and Galgate.

Local authorities have a duty to monitor and report on the air quality in their area, and any areas where the quality is likely to exceed objectives, an AQMA has to be declared. The authority also has to come up with a plan on how to improve the air quality, although this is as far as the legal obligation goes.

Improving urban air quality is easy, as approximately 70-80% of all pollution comes from motor vehicles. Reduce the volume of traffic, improve air quality, towns and cities become more liveable and fewer people die because of poor air quality. Everybody wins. I’ve never heard anyone comment that Amsterdam is a lovely city, but what it needs is more cars.

Back to Galgate, which is a small town a few miles south of Lancaster. Galgate straddles the A6, and current measurements from the Dept. for Transport has over 15,ooo vehicles a day passing through the its centre. The town is located between junction 33 of the M6 and Lancaster University, so without moving the motorway junction there is no alternative route.

Why am I blogging about it? My PhD looked at urban air quality, so I could be called an expert. This blog post, therefore, has two purposes; firstly to estimate what the annual mean NO2 concentration is for people living in the houses alongside the A6, and secondly to gain some valuable experience using the software Q-GIS. At Uni I used a Geographic Information System (GIS) for a great deal of analyses in my PhD, but the program that I was using wasn’t free. Q-GIS is an alternative which is open source, so completely free.

Back to the first purpose, Lancaster Council has placed five Diffusion Tubes in Galgate. These are a cheap and easy method to measure air quality and are generally attached to lamposts, being replaced each month (the diffusion tube, not the lampost). The cap at the bottom is removed once the tube has been deployed. A month later it is sent to a laboratory and a couple of weeks later you get the results.

Results from the five tubes in Galgate for 2014 are available from the Lancaster air quality webpage. This data, along with traffic data from the DfT, were used to estimate, or “model” the air quality for local residents in Galgate.

Specialists have many options to model air quality, but the two most commonly used are ADMS and DMRB. ADMS is a fairly complicated Gaussian plume dispersion model, which also costs almost £2000 for a single one year license. I use it extensively at work.

DMRB stands for the Design Manual for Roads and Bridges, which includes a free to use, Excel based spreadsheet which is reasonably straight forward to use for non specialists. Unfortunately it is not available to download at the present time. This is either because a new version will be released soon, or because it will be discontinued. I hope that it isn’t the latter for the reasons I stated.

Back to Galgate, and the map below (produced using Q-GIS and using Open Street Map), shows the centre of Galgate, the extent of the AQMA and the position of the diffusion tubes. The yellow road through the middle is the A6. It isn’t my best cartography work, but it is the first time that I’ve used Q-GIS, so I will improve. 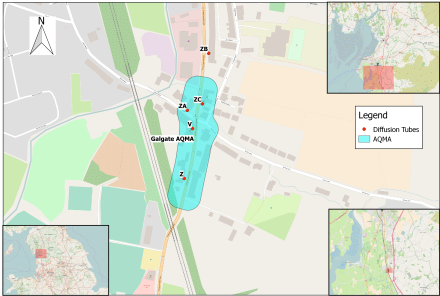 Now for the complicated bit. Using information form the Council I knew how far each diffusion tube was from the kerb, and using traffic data from the DfT I could model the NO2 concentration at each diffusion tube. The road NOx results are then run through another free Excel spreadsheet, the NOx to NO2 calculator, to calculate the modelled NO2 concentration. These are used to verify the modelled results alongside the measured results from the Council. I ended up with a verification factor of 1.6916, which is good for any air quality model.

I then picked two houses, one south of the crossroads where the front door opened directly onto the pavement, and one north of the crossroads with a very small front garden. I then ran DMRB once again, multiplied the road NOx concentration by the verification factor, ran these results through the NOx to NO2 calculator, and here are the results.

The units are micro-grams per cubic meter, and the air objective is only 40 ug/m3. The people living in these houses are being subjected to extremely poor air quality all of the time.

If you have driven or cycled through Galgate, or used the train, you can’t help but notice all the new properties that have been built. I then ran the model once again but with a substantial increase in traffic to reflect all of the new properties. Revised results are below:

The Institute of Air Quality Management has produced a handy guide to compare the increase new developments have upon existing residential properties.

The change in concentration at the two properties is 3.88% and 4.03%, relative to 40 ug/m3. Using the chart above this is a “Moderate” impact. Moderate doesn’t sound too bad, but there is only one level higher. “Substantial” should be renamed “Holy S*** that’s bad”.

If you’ve seen the news, you might have heard about the new Garden Villages that are going to be built. One of them is planned for Bailrigg, the area of land just north of the University. The proposal is for 3500 dwellings. Standard traffic consultant figures estimate that each dwelling will result in four car movements per day. That is potentially a lot more cars through Galgate, although the Garden Village plans do include ideas about moving the motorway junction.

My own view is that local authorities should have a legal requirement to improve air quality, and until they do, it will be business as usual. More roads, more cars and substandard cycling infrastructure.

3 thoughts on “Air Quality in Galgate”