or to be more exact, Isoman swim only race report.

Why only the swim? Why not the whole triathlon? Me and my beautiful wife had both entered the triathlon. I was doing the full race and my wife just the quarter distance, although the quarter still had a 1.75 mile swim, so not an easy race. We arrived at the race venue on the Friday and had a look around the lake. All good. We had a look at some of the run route. Again all good. We still had an hour before registration opened so we decided the drive one lap of the bike course. The lap was approx 15 miles, I would have to do it four times and my wife just the once.

The route turned off the dual carriageway and headed into the countryside along some very pleasant roads, before once again throwing you straight out onto the dual carriageway. Back at the venue neither of us were happy about the cycle route, so after a chat with the race director we dropped down to swim only entrants. Back in the 90’s the Bournemouth Olympic Distance Triathlon used to be mainly on dual carriageways, but one lane was coned off and the race was early on a Sunday morning. I would have been on the bike at Isoman from 11 to 1-ish, on a Saturday. Far too busy to be safe.

The race director apologised but said that there wasn’t a lot they could do in Redditch, as there was so many busy roads. Maybe don’t hold the race in Redditch!

The morning of the race was far more relaxed as we didn’t need to rack bikes or set up transition. Instead we ambled to the swim start and waited for the off. The full race/swim was off at 7am and Helen would be off at 10.30. As I was only doing the swim I decided the make it a bit tougher by going without my wetsuit.

There were only three of us without wetsuits. As we waited in the water for the gun to go off I spotted TC, the numpty, arriving late and rushing into the water after the start. At least I wouldn’t be last out of the water I thought with a smile. The water temperature was fine without my wetsuit and I was soon into a nice rhythm. The long swim involved eight laps and I planned to stop for a drink at the end of laps two and four. It was a lot harder than I expected and was glad that I had a couple of gels with my water bottle.

At the end of lap five I was feeling tired, but I spotted Helen next to the feed station which gave me a boost. Lap seven was really tough and I seriously considered stopping, especially when faster swimmers from the half or quarter overtook me like I wasn’t moving. Half a banana and a drink and I knew that I could manage one last lap.

I dragged myself out of the water in a time of 4 hours and 34 minutes. Not last. My longest swim both time and distance, and my longest swim by a very long way without a wetsuit. It also appeared that each lap was a bit long, as most people took longer than expected and recorded more, so it was probably nearer to 7 and a half miles instead of the advertised 7.

Originally I had planned to head back to the car, get changed and faff about for a bit before seeing Helen finish her swim, but I had taken so long she finished only a few minutes after I did. My beautiful wife was well pleased, it had also been her longest open water swim and she had enjoyed every minute of it, except for losing sight of a buoy one time and having to swim a bit extra. 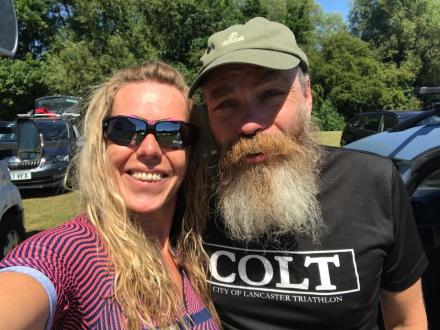 In the heat I was very pleased not to be doing the whole triathlon. In previous years the winner has taken just over nine hours, this year only the winner went under 12 hours. We were finished and back at Helen’s brother’s house by 1pm and Helen had enough energy to go for a short bike ride while I had a sleep. The swim only event meant that we could enjoy the weekend and go out with the outlaws for a posh pub meal, so it all worked out in the end.